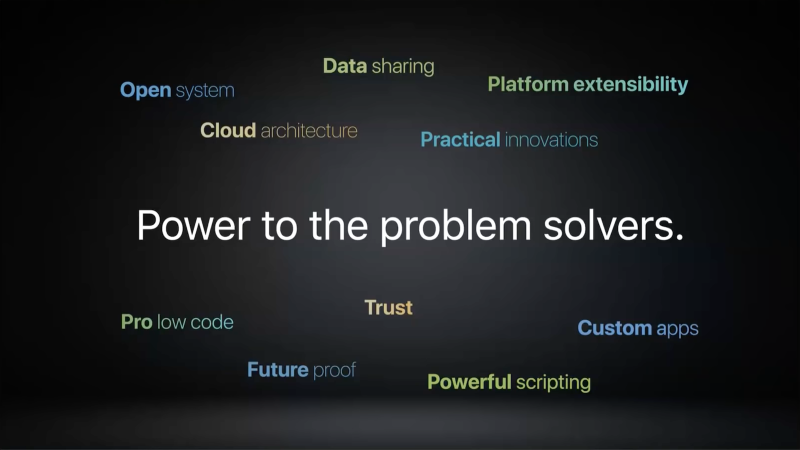 On April 26, 2022 Claris held a public webinar that contained some big Claris news. Claris announced a new web application called Claris Studio, a new custom application seeding program called Claris Problem Solvers Circle, a rebrand of FileMaker products and the features of upcoming FileMaker updates. In this article I explain what is in the pipeline.

On April 26, 2022 Claris held a public webinar that contained some big Claris news. Reflecting a desire to be more transparent in its future plans, Claris announced a number of new things:

I’ll look at each of these in turn.

Claris Studio is a new web application that will be released in the fall/autumn. It contains a new application development environment and incorporates Claris Connect. It will be the place where you will manage users and organizations.

The new web application has a backend that is designed to:

In a similar vein, the user interface (UI) and user experience (UX) has been designed to:

Claris Studio is designed around hubs, which Claris says are collections of forms that work together.

Claris Studio has a data pipe to existing FileMaker custom applications so that they can continue to provide functionality and value to customers for years to come. And of great interest to FileMaker developers is that Claris Studio, from the very first release in the fall/autumn, contains a feature that they have been asking for, for many, many years! That is… anonymous users! This is the ability to collect data from a large number of users whose identities you do not necessarily know.

Along with Claris Studio, Claris is going to introduce a new licensing model, best summed up by this slide that Claris presented during their April 26 webinar:

The new licensing model will see all software binaries and tools being free for single users: Claris Studio will be free and there will be a freemium version of Claris Pro. There will be no time limit; they will remain free permanently in single user mode. And in single user mode, all developer tools will be available. When a developer – external or in-house – is ready to deploy a developed custom application, then Claris will charge for the users with whom it is shared. The paid license covers access to Pro, Server, Connect and, optionally, Cloud.

Clearly this is a significant change for Claris but I think it’s a bold one, and has the potential dramatically to accelerate FileMaker’s – whoops, sorry! – Claris’s growth.

Incidentally, for existing users with pre-existing license contracts, everything will continue to work as it does today.  You don’t have to change. If you want access to Claris Studio as part of a deployed custom application, though, you will need to get one of the new licenses.

On May 3, 2022 – the day that I’m writing this article – Claris launched the Claris Problem Solvers Circle, an initiative of a kind that has not been tried before. It is designed to provide fertile ground on which customers and developers can work together to create innovative new solutions to business problems or challenges.

The Claris Problem Solvers Circle provides access for two years to every Claris product, including Claris Connect and Claris Studio, to every user in an organization. Users can include temporary workers, contractors and consultants. Claris is also promising ‘white-glove onboarding assistance for initial setup, installation, and connectivity’ (though only in English).

The Claris Problem Solvers Circle is only open to existing volume license customers with less than two years remaining on their license (as of May 3, 2022). The program is limited to the first 500 eligible customers, allocated on a first-come, first-served basis. Enrollment ends on June 24, 2022, or when 500 customers have been selected, whichever comes first.

The cost of the program is an increase of 30% on the current license cost of a customer. So, for example, if you are a customer with an existing license for 30 users, then the cost will be equivalent to an additional 9 users: i.e. you will need to pay for the equivalent of 39 users for the two years of the program. This will be the extra cost regardless of whether there are an additional 70, 700 or 7000 users in your organization. At the end of the two year program, the license will be trued up: Claris will look at how many users are actually using the custom applications or connections that have been made and will adjust the license accordingly.

Finally, FileMaker Pro is getting two updates. The version 19.5 update is due soon (as of the date of this article). It has the following headline changes:

The version 19.6 update is planned. It is currently planned to have the following headline changes: