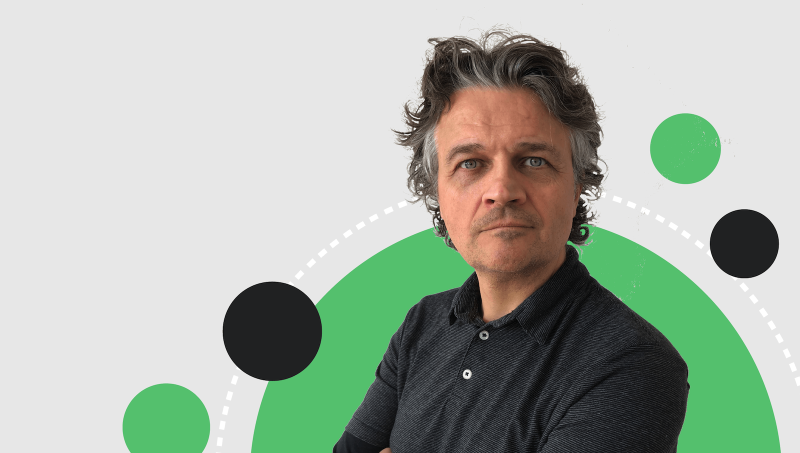 Claris recently published an interview with Anthony Lambert, our Founder and CEO. In the interview, Anthony describes when he started developing in FileMaker and why he chose FileMaker. He also discusses what he likes most about FileMaker and talks about setting up a company in Chile.

Claris recently published an interview with Anthony Lambert. In the interview he was asked about his career as a FileMaker developer and why he chose FileMaker as a development platform. The interview can be found on the Claris website but only in Spanish. Claris has kindly given us permission to provide an English translation here.

I will answer these two questions together, if I may!

When did you start developing and how did you know the FileMaker platform? Why did you decide to become a FileMaker developer?

In 1996 I was a consultant in a large environmental consultancy and, in a somewhat reckless move, I decided to leave my job and go to Thailand for a year. Despite being 20 years of age, without a partner, without children and without a mortgage, I felt that life was too stressful and I wanted to relax on a beach for a while. Before leaving my job, a client told me that he needed to complete another environmental project and that he wanted me to do it. I thought “hmm, it could be a good idea, I would get some money and I could relax on a beach in Thailand for longer!” So after receiving permission from the company I was leaving, I did the project for the client. At this point, you probably assume that I started packing my suitcases…

Actually, no! The client for whom I carried out the project had been telling his many business partners about me and I began to be flooded with work. I was so busy that I started adding other contractors to the project teams. I then began looking for a way to manage the business: creating projects, scheduling them, organizing contractors, recording hours, compiling invoices, submitting correspondence. I was using an Apple laptop at the time and the available software was relatively paltry and completely dismal.

And this is where FileMaker comes in. It was in 1997 or 1998 during a weekend in a hotel in Indonesia, where I was doing an environmental project, that I discovered FileMaker. At the same time, I found a fantastic custom FileMaker app that someone had developed and that was based on a calendar. I knew immediately what I could do. So I bought FileMaker, bought the custom app and modified it so that it had the additional elements I needed. I was so happy with what I had done and the positive impact it had on my business that I began to realize two things: first, that I enjoyed developing in FileMaker more than in environmental consulting; and second, that the type of app I had created would be useful for a large number of companies. So I made the decision to become a FileMaker developer.

First of all, its versatility. You can create a custom app in FileMaker to perform an incredible range of functions. Can it be used to make an app to organize events? Yes! An app to analyze manufacturing data? Yes! An app to record product sales? Yes! An app to manage a real estate investment portfolio? Absolutely, yes!

Secondly, its flexibility. A FileMaker app can quickly adapt to changes as your business grows. Do you want to add an online power consumption meter to your manufacturing unit? No problem: add another table to capture the data, add another chart to the dashboard and that’s it. Do you have a new performance indicator in your business? Easy: add one or more fields, adapt a report and you’re done.

What is the solution you are most proud to have developed and why?

I look back at the first app I wrote, the one I mentioned earlier, with great affection, since it started me on my journey to FileMaker. But my answer will be similar to that of artists when asked the same thing: I am very proud of my most recent work! My company is about to launch its first ready-made FileMaker app, one that can be used by organizations without any modification. It’s called ‘MENDLOG‘ and manages maintenance tasks. It has a sharp and clean user interface and a dashboard that directs the user to priority areas and displays summary graphics on the fly.

How has FileMaker influenced your professional career?

Well, the most obvious thing is that FileMaker literally changed my career. From being an environmental consultant to being a FileMaker developer. Not only did I start a FileMaker business in the United Kingdom, but on a personal level I took and passed all FileMaker certification exams from version 7 (the first available) to version 16. I plan to achieve version 19 very soon.

How was the idea of setting up your own company born and what are you specialized in?

Apart from my first years as an employee of a large environmental consultancy, I have always run my own company: first an environmental consultancy and then a FileMaker development company. That was in the United Kingdom; so now that I live in Chile, it was natural for me to establish a FileMaker consultancy in Chile. Although based in Chile, we work for clients anywhere in the world. We do not specialize in any particular industry: the key skill we bring is the ability to map the internal processes of a company and create a personalized app that improves those processes. The last thing a FileMaker developer must do is embed existing inefficiencies in an app.

What advice would you give to someone who is interested in starting their professional career as a FileMaker developer?

There is a thriving ecosystem of FileMaker developers who spend a lot of time helping grow the FileMaker community as a whole. When you learn FileMaker for the first time – or indeed, at any time – this community is invaluable. Many of the techniques that I have learned, and that are now part of the fabric of my company, I discovered in this community.

In addition, I recommend going for certification. It does not prove that you are a good developer, it cannot show that you know how to anticipate what the customer needs, but it does confirm that you have extensive knowledge of the FileMaker product and that you know how to apply it when developing custom apps.

What challenges or project are you currently working on?

Survive Covid. Oh, do you mean FileMaker? Well, MENDLOG is about to launch. We are also working on two other ready-made apps. Probably the next one we will launch is a ready-made app in FileMaker that manages the manufacturing process, from scheduling orders on different machines to generating production summaries used by directors to verify that performance objectives are met. And we have a series of ongoing projects for clients, such as a property management app and a case law database.

Tell us something more about yourself.

I never got to Thailand!